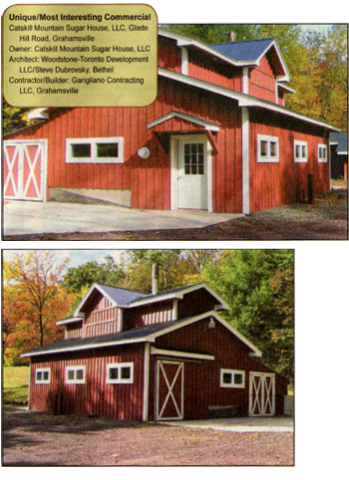 A beautiful blend of an old art and new technology.

It's about family. It's about the land and its trees, their usefulness and their beauty. It's about the spirit of bountiful abundance and the responsible use of renewable resources. Ground was broken for the Catskill Mountain Sugar House in Grahamsville in September of 2008 and construction was completed in early 2009, just in time for the new family business to take full advantage of its high yielding "sugar bush," the term maple producers use for a grove of sugar maples. The idea of the facility was first conceived by brothers Jim and John Garigliano, who had worked seasonally for maple sugaring operations in the Grahamsville area where they grew up. Enthusiasm for the project grew, initiating a New England tour of maple sugar houses by the young men's parents, Monticello attorneys Walter and Barbara Garigliano. What Walter and Barbara saw on their tour was both disappointing and inspiring: disappointing in the sense that they did not see anything they wanted to emulate, and inspiring because it forced them to focus on the features that they felt would result in "a better sugar house."

Back home, three of the four family members involved in the project-John was attending his final year at college-put their heads together and began serious deliberations. On the land the Garigliano family has owned for generations, an enormous sugar bush was growing with the untapped potential of thousands of gallons of sap that could be boiled down for syrup, sugar, maple candy and other delicious culinary products. The family knew they wanted a modern processing facility. Walter and Barbara forwarded the photos taken on their' Vermont tour to Steve Dubrovsky of Woodstone Toronto Development, LLC along with a letter in which they expressed their ideas. They were hoping for a small sketch or some comments about the feasibility of their planned structure. "We didn't hear from Steve for quite awhile," Walter said, "and then a wonderful and beautiful complete set of plans arrived. It was more than we had hoped for."

Dubrovsky's architectural vision of the Catskill Mountain Sugar House portrayed a building that cooperated visually with the surrounding landscape and existing buildings. Rather than just a multipurpose structure into which an evaporator fit, Dubrovsky envisioned a sugar house designed around its special function of boiling and condensing maple sap. Garigliano Contracting, LLC, had the task of erecting the building. "The whole building is designed to get the steam [from the evaporating process] up and out, because if the steam hangs there, it creates a thick ceiling and hinders how much will blow off," said builder Jim Garigliano. Work on the project started in September of 2008. Thanks to optimal weather conditions and few other delays, the job was completed in time for the beginning of the 2009 sap running season. The building's structural appearance, with its vertical siding and elevated central roof, gives an impression of upward movement above rooted strength. Its classic red color suggests the vitality of the trees, as well as complementing the hue of a nearby barn. The clean lines of the building, and design details such as the double-X barn doors and the bright white accent trim, add to the family farm feeling. The metal roofs seem to disappear against the surrounding forest, making the footprint on the land a soft one.

Special features could be incorporated during the process of construction rather than retro-fitted to an existing construction. This allowed outside air vents, needed for steam movement, to be molded right into the concrete floor. A series of hand-operated, pulley-driven louvers that open and close on the roof can be adjusted to take advantage of changing wind direction, also aiding in the movement of the huge quantities of steam rising from the evaporator during the six or seven weeks of the sugaring season.

The maple sugaring season in the Northeast normally begins at the end of February and runs through March and part of April. "During sap season, you're out basically all daylight hours, working in the woods making sure all the equipment is operating properly to collect the sap," said John Garigliano, manager of the family business. "Then, from the afternoon into the night, sometimes until 3:00 or 4:00 in the morning, you're boiling sap. Sap is only two percent sugar, so you have to boil water out of it to concentrate it." From the time of the first North American colonists, sap collection has been a matter of hanging buckets under spouts fitted into holes drilled in the trunks of maple trees, but today's technology of vacuum sap collection has revolutionized the process. "The process tricks the trees into believing that the atmospheric pressure is lower outside the tree than inside the tree," Walter Garigliano explained. The sap travels through a single line, one hundred to a thousand feet in length or even longer, that is attached to a number of trees. By means of suction combined with gravity, a gentle current guides the sap into storage tanks.

The interior of the sugar house consists of three rooms, the largest of which is the home of the new 40-inch by 16-foot evaporator. There's a storage room for materials needed to tap trees, buckets, pails, spouts and lines, and there's another, smaller room to store the bottled product. Although the requirements for interior design were basically confined to aiding the movement of steam up and out of the building, it pleased the family to continue the country aesthetic on the inside. A beautiful, warm, golden glow radiates from the knotty pine that extends from the floor across the high ceiling of the evaporator room. An orange maple leaf pattern echoes the maple theme across the stamped concrete counter tops.

Jim enjoys the competitive spirit of the Sullivan Showcase Awards Program. "It gives people incentive to make things nice and keep things clean, as well as show off what you can build and how well you can build." The Gariglianos have been volunteering with Sullivan Renaissance since its inception in 2001, most recently providing equipment and manpower to hang seasonal flower displays from buildings and light posts. The family also takes its turn keeping the flowers watered. "The beautification to the county has been wonderful," John said of the many projects, large and small, that have been. undertaken by Sullivan Renaissance and the Sullivan County community.